A history of mortgages in the UK 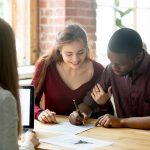 We all know about mortgages. The vast majority of us are dependent on getting one to buy a property. With the value of outstanding residential mortgage loans hitting £1,513.3bn in Q2 20201, it’s a multi-billion-pound industry. But it wasn’t always.

Before records began There is little mortgage data from centuries gone by. However, analysis of data from 1831 suggests that up to 22% of households could have owned their property2. For the vast majority who couldn’t afford a home outright, building societies sprang up in the 18th and 19th centuries to enable the less affluent to achieve their homeownership dreams. Members would pool their money for the purchase of land and building materials, as well as mortgages. For many years, building societies were stalwarts of the mortgage scene.

It wasn’t until the 20th century, following World War I, that the mortgage market really took off. Increasing dissatisfaction with slum-like living conditions resulted in a huge homebuilding drive at the end of the war to provide ‘homes fit for heroes.’ By the 1930s, cheap homes and readily available mortgage finance enabled a budding middle class to get onto the property ladder. Total mortgage assets held by building societies rocketed from £69m in 1919 to £678m in 19403. Even so, homeownership was still mostly unaffordable for the working classes, as evidenced by a 1931 survey4.

The rise of the affordable mortgage Following the abstinence of WWII came a period of economic boom, with low house prices and interest rates boosting homeownership from 29% in 1951 to 45% in 19645. The 1980s saw a flurry of new legislation to boost mortgage affordability. First, the Right to Buy scheme was introduced under the Housing Act 1980, enabling council house tenants to purchase their home at heavily discounted rates. Next, in 1983, came the MIRAS initiative (Mortgage Interest Relief at Source), which gave borrowers tax relief on their mortgage interest payments. By 1991, homeownership rates had soared to 67% for 25 to 34-year-olds and 78% of 35 to 44-year-olds6.

Unfortunately, the mortgage boom wasn’t to last. The bubble was burst by the 2008 financial crash, the impact of which still reverberates today. Tighter restrictions, introduced in 2014, brought in more stringent lending criteria that have had a particularly significant impact on first-time buyers. Recent figures tell a tale of declining homeownership, with 35 to 44-year-olds more than three times more likely to rent privately than they were 20 years ago7.

As a mortgage is secured against your home or property, it could be repossessed if you do not keep up mortgage repayments.