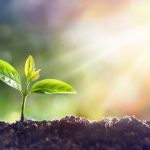 Although the latest gross domestic product (GDP) statistics revealed the UK suffered a record slump in 2020, there are now growing hopes the economy is on the cusp of recovery.

Figures published by the Office for National Statistics (ONS), showed the UK endured a record fall in output last year as coronavirus restrictions ravaged the economy. Across the whole of 2020, GDP fell by 9.9%, more than twice as much as the largest previously recorded annual decline.

However, the data did reveal a positive growth rate across the final three months of the year, meaning the UK avoided a double-dip recession. Furthermore, in the month of December alone, the economy actually grew by 1.2% after some lockdown restrictions were eased.

While January’s reintroduction of stricter national lockdown measures is expected to result in first-quarter economic contraction, data from February’s IHS Markit/CIPS flash composite Purchasing Managers’ Index, paints a more optimistic picture of current activity than many analysts feared. The closely watched survey’s headline figure rose to 49.8 last month, up from 41.2 in January, suggesting that the economy was barely shrinking in the first half of February despite being in lockdown.

Commenting on the survey, IHS Markit’s Chief Business Economist Chris Williamson said, “Although the data hint at a renewed contraction of the economy in the first quarter, business expectations for the year ahead improved to the highest for almost seven years, suggesting the economy is poised for recovery.”

Bank of England (BoE) Chief Economist, Andy Haldane, also recently predicted the UK will witness a sharp rebound in growth by the spring. Mr Haldane described the economy as a “coiled spring” ready to release large amounts of “pent-up financial energy”, with consumer confidence set to surge thanks to the success of the NHS vaccination roll out programme. While unemployment continues to rise and there remains great uncertainty over the future of many furloughed jobs, last month did see some tentative early signs that the labour market may be stabilising.

According to the latest ONS data, an estimated 1.74 million people were unemployed in the UK between October and December, with younger workers bearing the brunt of job losses witnessed since the start of the pandemic. The overall unemployment rate now stands at 5.1%, the highest recorded figure in almost five years.

Although unemployment has risen, the scale of job losses has undoubtedly been suppressed by the government’s furlough scheme, which Treasury figures show was supporting 4.7 million people at the end of January. This level of state support has clearly created considerable uncertainty over the true underlying picture of conditions in the labour market.

However, while it remains unclear what will happen once the furlough scheme ends, recent data has offered some tentatively encouraging signs for the labour market. ONS data, for instance, recorded a small rise in the number of employees paid through payroll in January, offering a potentially early sign of stabilisation in the jobs market.

Data released following a BBC Freedom of Information request, also revealed a decline in the number of jobs at risk of redundancy. Insolvency Service figures showed 32,000 redundancies were proposed in January, the lowest monthly total since the pandemic began, with the exception of December, when figures are distorted by Christmas holidays.

In addition, survey data collected by the Chartered Institute of Personnel and Development (CIPD), found that over half of all employers intend to recruit staff in the coming months. The CIPD said this was the first positive sign for employment prospects in a year and that the findings may suggest unemployment is close to a peak.

Major global indices closed in positive territory at the end of February, as recovery hopes gained traction. With the vaccine roll out continuing at pace and a roadmap for exiting lockdown unveiled in the UK, cyclical stocks such as airlines, banks, housebuilders and fashion retailers made strong gains toward the end of the month.

Despite this positivity, many global stocks closed lower on the last trading day of the month, as investors took profits in technology and commodity-related equities. Concerns weighed over rising global bond yields, after US Treasury yields jumped at month end. Increased hopes of an economic rebound fuelled fears of rising inflation and a shift to tighter monetary policy, making investors question whether central banks would retain ultra-low interest rates. However, better-than-expected Q4 earnings did serve to reinforce some optimism about a quicker corporate rebound in 2021.

In February, the Organization of the Petroleum Exporting Countries and its allies (OPEC+), agreed to maintain its oil output policy, a sign that producers are content that deep supply cuts are causing inventories to tighten. Brent crude closed the month trading at around $64 a barrel, a monthly gain of over 17%. Gold is trading at around $1,779 a troy ounce, a loss of 3.99% on the month, as a stronger dollar and expectations for improving economies reduced demand for the safe haven asset.

Official statistics show the UK headline rate of inflation has edged higher, with economists warning of further upward pressure during the coming months.

Figures released by ONS, revealed the Consumer Prices Index 12-month rate – which compares prices in the current month with the same month a year earlier – rose to 0.7% in January. This was slightly above the consensus forecast in a Reuters poll, which predicted the rate would remain unchanged at December’s 0.6% figure.

ONS said the increase was fuelled by a jump in the cost of food, with the price of crisps, cauliflowers, salmon and prawns all rising sharply in January, and higher household goods prices, due to less new year discounting on items such as bedding and sofas. In contrast, clothing and footwear prices had a downward impact as retailers offered relatively large discounts in a bid to shift stock during lockdown.

Inflationary pressures are likely to build further across this year, as the temporary hospitality VAT cut is reversed, the household fuel bill cap is lifted and pent-up consumer demand is released once lockdown restrictions ease. Indeed, many economists now believe inflation will breach the BoE’s 2% target by the end of 2021.

The BoE has instructed high street banks to prepare for the possibility of negative interest rates, although policymakers stressed such a move is not ‘imminent or indeed in prospect.‘

In early February, the BoE gave lenders six months to be operationally ready for the introduction of negative rates should the Monetary Policy Committee (MPC) decide such a policy is required. However, while this does mean sub-zero rates are set to become part of the Bank’s crisis-fighting toolbox, BoE Governor Andrew Bailey, said the announcement should not be interpreted as a sign borrowing costs will actually drop below zero.

Commenting after the announcement, Mr Bailey said, “My message to the markets is, you really should not try to read the future behaviour of the MPC from these decisions and these actions we’re taking on the toolbox.”

While the move will therefore provide the MPC with flexibility to deploy negative rates if the economy suffers a further downturn, most analysts believe sub-zero rates are unlikely to be required by the time banking sector preparations are complete. Indeed, with the economy widely expected to rebound strongly from spring onwards and inflationary pressures mounting, most economists now predict base rates will not fall any further.